by Arrington de Dionyso (US) 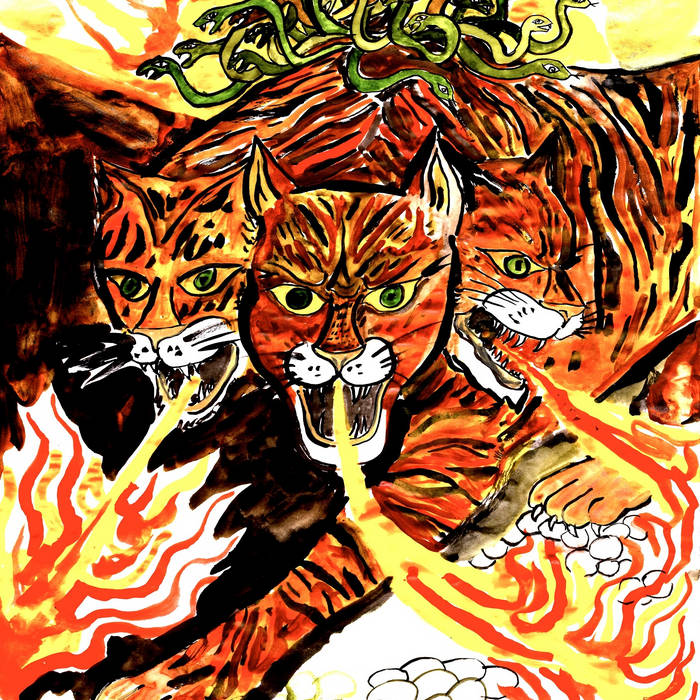 Former front man of Old Time Relijun and current leader of Malaikat dan Singa, de Dionyso merges a Beefheartian vocal ability with heavy drones and a bizarre musical sensibility developed from his wide musical, world and astral travelling. This is music that channels La Monte Young via a holiday in Surakarta with Fushitsusha.

Derek Walmsley in The Wire: "Arrington De Dionyso's 'Lovers And Dragons' way with a four-track recorder is enough to make you believe in magic - Javanese reeds and shruti boxes are blurred with his voice in the mix to create a narcotic swirl of sound."

The Quietus: "Based in Olympia in Washington State, USA, Arrington de Dionyso is a visionary outsider, whose music is as colourful as his eye-catching ecstatic paintings of nudes and animals (some included here as J-card artwork). He's previously garnered a heap of releases as a 'mere' clarinetist, but this tape, mostly recorded in collaboration with brilliant drummer, Gal Lazer Shiloach, reaches far trippier territory than what we'd called jazz. In addition to various sizes of clarinet, Dionyso plays the droning Indian sruthi box, 'Sulawesi flute', 'tarompet' (apparently a 'Javanese double reed') and employs stunning vocalisations, including what sounds like the well-know weird sound of tuvan throat singing. Side one opens with blasts resembling a sort of headbanging stoner take on Peter Brötzmann, while later a passage of clarinet freeforms atop a sruthi box drone and near-motorik rhythms approach propulsive jazz-rock territory. Dionyso's sheer madness is something to behold, and along with some truly blinding skins work from Shiloach, and a striking guest appearance from harpist Graeme Smith (who channels Alice Coltrane), Lovers And Dragons is ferocious, bold and utterly unlike anything else. Have your mind melted."

VanguardRed: "Lovers And Dragons is a deafening display of rhythmic and textural prowess."

Excalim! Music: "This album paints a twisted parade of new Hindu medievalism fraught with anarchic banquets, of primordial electric ooze. Starting with the raging multi-track clarinet fanfare of "Reog Doom" accompanied by a stompin' drum track that barely hangs on to the groove, Lovers and Dragons seems a full-on reimagining of Angus MacLise's (the original percussionist of the Velvet Underground) most fevered psychedelic dreams. Oddly enough, the synthesis seems as much to do with Eastern tribal ritual music as it has to do with industrial noise. "Danau Lindu" (Indonesian for "Earthquake Lake") mists silently on flutes, wave drums and drones, while "Barogan" blasts flailing free-drumming, Tuvan throat singing and guttural reed statements. Breathtaking in its vision, Lovers and Dragons manages to get to the fear that sits behind a lot of the most fraught ritual music. "

Recorded onto 1/4 inch tape with a Tascam 388 by Arrington de Dionyso at Dub Narcotic in Olympia, Washington, USA. August 2014.

Mixed and mastered with Ben Hargett.